“How long would you give the average baby to walk before you didn’t let the baby try any more? Until the baby walks!!!”
– Tony Robbins

How to Apply This to Your Own Life

Let’s rephrase this for adulthood.

How many times would you let yourself fail at business, learning a new skill or life before you didn’t let yourself try any more?

If you really want the thing, as many times as it takes until you succeed.

Henry Ford’s early businesses failed and left him bankrupt several times before he was able to gain success with the Ford Motor Company. His net worth would be equal to around $199 billion today.

Colonel Sanders founded KFC “Kentucky Fried Chicken” in his 60s. His recipe was rejected over 1,000 times before a restaurant picked it up.

Michael Jordan, winner of six NBA championships and five Most Valuable Player Awards. “I have missed more than 9,000 shots in my career. I have lost almost 300 games. On 26 occasions I have been entrusted to take the game winning shot, and I missed. I have failed over and over and over again in my life. And that is why I succeed.”

Sir James Dyson over the course of 15 years and 5,126 failed prototypes finally succeeded at creating the best-selling bagless vacuum cleaner that led to a net worth of $3.7 billion today.

Sometimes it’s just better to avoid long posts and get straight to the point. Think of these as “Bite-sized Nutrients” for your brain and life. 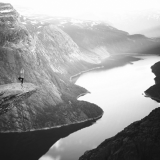